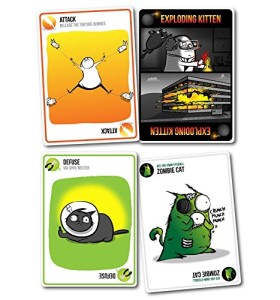 I love TheOatmeal, and if you’ve heard of it, then you do too. The rules are quite simple. Players pull cards until someone gets an exploding kitten. Unless they have a defuse card, they are out of the game. Keep in mind that this is an extremely dumbed down description of this game, and the laughter will not only ensue but increase as the game goes on. As one of the highest-earning kickstarter campaigns, it was popular before it was even released, and the results did NOT disappoint. From kittens, to goats, and magical enchiladas, the creativity behind this game is second to none. Grab your copy, a few beers, and a handful of friends, and you’ll have hours of awesomeness ahead of you.

Download links are emailed to you immediately after purchase is completed!

Watermarks are removed from purchased videos!

I own a club in Leeds, England, so I'll be getting the countdown from you every year. I was just looking around on the internet for a countdown and then your email came through which was really handy, as last year your countdown worked really well. - Alex